Terrell Hogan is part of the legal team representing the family members of four deceased El Faro crew members. They were among the 33 crew members of the El Faro who perished at sea on October 1, 2015, after the cargo ship lost power while in the path of Hurricane Joaquin, en route to Puerto Rico from Jacksonville. The National Transportation Safety Board (NTSB) found the wreckage of the El Faro off the coast of the Bahamas, and the United States Coastguard has a pending Marine Board of Investigation to determine the cause of the El Faro’s sinking. The NTSB is also conducting its own investigation.

Wayne is a Board Certified Civil Trial Lawyer, the highest specialty recognition given by the Florida Bar. He specializes in all types of cases involving personal injury, medical malpractice, wrongful death, defective products. Hogan has continuously fought injustices that inflict death and injury and focuses on bringing to account those who profit from defective, dangerous products. He can be reached at (904) 722-2228. 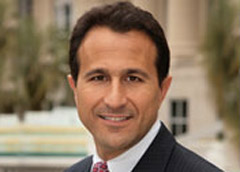 Angelo is a Board Certified Civil Trial Lawyer. He specializes in all types of cases involving personal injury, medical malpractice, defective products, and product liability. He began his private practice representing individuals who have been injured or harmed by the negligence and wrongdoing of others. Since that time, Angelo has continued to pursue his interest in trying cases on behalf of his clients. He can be reached at (904) 722-2228.