Leslie A. Goller Named JWLA’s Woman Lawyer of the Year 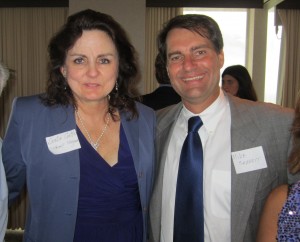 The Jacksonville Women’s Lawyers Association (JWLA) chose Leslie Goller as its Woman Lawyer of the Year. The award was presented at JWLA’s 2013 Judicial Reception at the River Club in downtown Jacksonville.

“JWLA chose a lawyer with caring, determination and heart, ” said Wayne Hogan.  JWLA’s Woman of the Year Award recognizes the honoree for significant contributions in the areas of professionalism, serving as a role model, advancing the causes of women and community involvement

Goller is a trial attorney at Terrell Hogan, where her practice focuses on consumer litigation. She is an environmental advocate, election lawyer and community activist.

Through her pro bono service, she’s helped keep the air cleaner by stopping incinerators from polluting the air and helped protect the St. Johns River by serving on the legal committee for the St. Johns Riverkeeper. She also serves on the Election Advisory Panel for the City of Jacksonville and coordinates and trains volunteer election lawyers. Recently, Goller is focusing on keeping our roadways safer by giving distracted driving educational presentations to local high school students and employers.

Goller is the past recipient of the Environmental Woman of Action for the State of Florida Award, the Mimi & Lee Adams Environmental Award and the Juvenile Diabetes Foundation’s Volunteer of the Year Award. A graduate of Duke University, she received her JD from Washington & Lee University.

She is the 13th recipient of JWLA’s  Woman Lawyer of the Year.  Read the Jacksonville Daily Record story.