Wayne Hogan received the American Association for Justice 2017 Lifetime Achievement Award at the annual convention in Boston on July 25. The Lifetime Achievement Award is one of the organization’s highest honors that recognizes a dedicated AAJ member whose courtroom advocacy has significantly advanced the rights of the wrongfully injured and furthered the cause of justice. The AAJ works to preserve the constitutional right to trial by jury and protect access to justice through the legal system when they are wrongfully injured – even when it means taking on the most powerful corporations.

“For over four decades Wayne’s efforts in the courtroom and in the community have accomplished more than anyone else I know to improve the life of his fellow man,” said Evan Yegelwel, Hogan’s law partner of 33 years. “He is a fearless trial attorney who has been involved in the early stages of some of the most significant litigation in the country.”

In addition to tobacco, Hogan held asbestos companies accountable for causing disease and death. He won Florida’s first asbestos punitive damages verdict that punished the world’s largest asbestos corporation for its reckless conduct that led to the death of a World War II U.S. Navy veteran. The Navy boilerman was not warned about the dangers of asbestos exposure on the job and died from asbestosis. The precedent-setting case paved the way for other asbestos claims and helped make workplaces safer. Over the decades, Hogan and his firm have represented thousands suffering from asbestos-caused mesothelioma and lung cancer.

In his acceptance speech, Wayne emphasized his respect for the institutions like the American Association for Justice that protect the people’s access to justice. He recalled what Ryne Sandberg said at his induction baseball Hall of Fame:

“I was in awe every time I walked onto the field. That’s respect. I was taught you never, ever disrespect your opponents or your teammates or your organization or your manager and never, ever your uniform. You make a great play, act like you’ve done it before; get a big hit, look for the third base coach and get ready to run the bases; hit a homerun, put your head down, drop the bat, run around the bases, because the name on the front is a lot more important than the name on the back. These guys sitting up here did not pave the way for the rest of us so that players could swing for the fences every time up and forget how to move a runner over to third.” 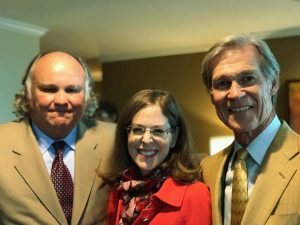 Wayne’s law partner, Matt Sowell, who attended the Stroke Litigation Section meeting at Convention, said, “Wayne’s acceptance speech revealed so much about him. He didn’t talk about himself or his accomplishments, Wayne explained how his accomplishments were the result of what others had taught him. That led into the main point of his speech – that as plaintiffs’ attorneys we have the responsibility to continue teaching others, including lawyers, judges, jurors, voters, and legislators. He clearly has the purest of motives in being a trial lawyer.”

Wayne is committed to increasing equality of opportunity. He and his wife, Pat, endowed the expanded Florida State University College of Law Donald J. Weidner Summer for Undergraduates Program. The program provides college students from diverse backgrounds with a month-long study immersion in legal studies. With more than 1,000 participants to date, the American Bar Association praised the program for its diversity.

AAJ President Julie Kane presented the award and read a letter written by his friend and partner, Evan Yegelwel, who could not attend as he is afflicted with ALS:

“Wayne has dedicated his professional and personal life to helping people in need of a voice and a hand. He never forgot his modest roots and the people who touched his life along the way. Over four decades his efforts in the courtroom and in the community have accomplished more than anyone else I know to improve the life of his fellow man and his community. Wayne combines rare talents. He is a fearless trial attorney who has been involved in the early stages of some of the most significant litigation in the country. But he also possesses the keen intellect that allows him to be one of the most successful appellate lawyers.…  At a stage in life  when many attorneys pull back, Wayne still serves on Florida bar committees and just this year voluntarily wrote the brief and then successfully argued before the Florida Supreme Court for the rejection of the Daubert standard. Wayne believes that you should always help your fellow lawyers succeed and he is genuinely happy when he sees other lawyers do well for their clients! Wayne once told me that some people join organizations to promote themselves and some join to promote the goals of the organization. Wayne is in the latter category as the AAJ leadership so clearly knows by bestowing this award today.

Laura Hack is a paralegal with Terrell Hogan. She has been with the firm since 1996 and has worked primarily for Wayne Hogan. She is an experienced Paralegal with 30+ years of working in the law practice industry. Skilled in Appeals, Civil Trial Litigation Support, Torts, Trial Practice, and Pleadings.