Alan Pickert is the 2017 Lawyer of the Year 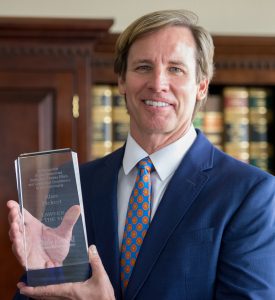 Despite his humility and protestations that he doesn’t deserve such a prestigious honor, Alan Pickert, a longtime partner at Terrell Hogan, was just awarded the Lawyer of the Year by the Jacksonville Bar Association and Daily Record. The JBA had over 2200 lawyers to choose from for this honor and they awarded it to Alan due to his incredible success both inside and outside of the courtroom. “Alan is a model of dedication to his clients, our profession, and the community. No task is too big or too small for him to do, and do well. Opposing counsel will say “civility” is his watchword; community leaders will say civic engagement is his passion,” said Wayne Hogan, President of Terrell Hogan.Alan has been handling mesothelioma, asbestos lung cancer, auto/trucking accidents and vaccine cases for over twenty five years at the law firm. He was named one of the Top 100 Trial Lawyers by National Trial Lawyer in 2015, has been annually selected since 2006 as a Legal Elite by Florida Trend Magazine and a Super Lawyer by Law and Politics, has been inducted into the Million and MultiMillion Dollar Advocate Forum for Verdicts and Settlements, selected at a Top Attorney in Florida, is AV rated by Martindale Hubbell and was honored by being named by Newsweek Magazine as one of the Top 20 Asbestos Lawyers in the United States. He has successfully handled over 2,000 asbestos cases and over 400 four wrongful death lawsuits and he obtained one of the largest awards in the history of Vaccine Court in Washington DC for a small child injured by the DTaP vaccine. He has also won numerous automobile, trucking, motorcycle, dog attacks and bike accidents over the years.

He has been published twice on the topics of asbestos and medical malpractice and is the past recipient by the Florida Supreme Court with the President’s Florida Pro Bono award. During the Annual Law Day Luncheon attended by hundreds of attorneys, Alan was praised for his deep involvement and charitable work with ALS, Special Olympics, HEAL/Autism, Sulzbacher Homeless Shelter, the Yates YMCA Gift Giving Campaign, and Jacksonville Area Legal Aid for the disadvantaged.

“Participating in those programs changed my perspective of life and how lucky and blessed I was and how I should help others less fortunate” says Pickert. “I still practice law fifty hours a week and I hate to lose. My clients always know they will get 100% from me,” Alan said. “I have two major mythical role models: Atticus Finch in To Kill a Mockingbird and the individual found in John Walter Wayland’s poem, The True Gentleman. If I can be half the man those two are, then I will be proud of myself.”

“Alan had no idea about the award,” said Hogan, “only a few of us knew in advance. Alan not only had no idea he was to receive the award, he innocently rearranged all his long-arranged travel plans that day for one reason, for the single purpose of being at the Law Day Luncheon to make an announcement about Evan’s Hope.” That kindness speaks to the gentleman Alan is. Evan Yegelwel was unaware that Alan had rearranged his schedule and was grateful and honored. “Alan is unique not only in the amount of time that he devotes to major volunteer organizations, but he also always steps up to a leadership role! An exceptional man, beloved by all who know him” said Yegelwel.

Congratulations to Alan Pickert on a well-deserved accomplishment: the 2017 Lawyer of the Year!

Alan Pickert 2017 Lawyer of the Year

Quiet leadership: A letter from the new JBA president

Laura Hack is a paralegal with Terrell Hogan. She has been with the firm since 1996 and has worked primarily for Wayne Hogan. She is an experienced Paralegal with 30+ years of working in the law practice industry. Skilled in Appeals, Civil Trial Litigation Support, Torts, Trial Practice, and Pleadings.